Written in the Cards by Lauren Linwood 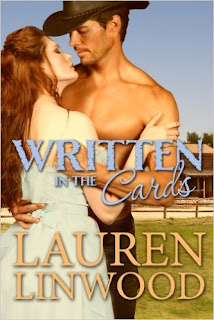 Maggie Rutherford jilts her too-perfect society groom at the altar and flees New York for the American West. There she turns her travels into dime novels that she writes and illustrates under the pen name Lud Madison.

After the Civil War, veteran Ben Morgan marries his childhood sweetheart and takes her to homestead on the Great Plains. Losing her and their unborn child in an Indian attack, Ben detaches from emotion and becomes a roaming gambler. When he kills a cheating opponent in self-defense, the man’s gunslinger brother swears revenge upon Ben.

Ben hides on a cattle drive and brings in a herd to Abilene, where a waiting Maggie wants to find a rough and tumble cowboy to interview for her next story idea. Sparks fly as the dangerous drover and popular novelist wind up living in the same household, running a general store east of Abilene. But with Black Tex Lonnegan hot on his trail, will Ben run from his growing attraction to Maggie and the gunfighter’s promise of death–or will he make a stand for his life–and love?

This is the first western romance I have read by Lauren Linwood. I’ve read other sub-genres by her, though and enjoyed them a great deal. When Ms. Linwood asked me to read and review Written in the Cards, I happily agreed. This book is another fine example of her writing style, and I thoroughly enjoyed it.

On the day of her wedding, Maggie Rutherford receives information that has her leaving her intended standing at the altar watching as she flees. She travels west, leaving her old life behind her to pursue her writing career and visit the places she writes of in her books.

Ben Morgan lost his wife and unborn child in the most horrific way. For the past six years, he has gambled his way from one state to the other. When he runs afoul of a notorious gunslinger, he chooses a different path, signing on with a cattle drive that takes him to Abilene, Kansas, a town close to his brother.

Ben meets the enthralling Maggie when she interviews him for her next book, and he is drawn to her in a way that has never happened before. When the couple is thrown together, the sparks fly. Will Ben give up his wandering ways for the charming Maggie, or will he move on?

One thing a particularly liked about this story is that I was immediately thrown into an intensely emotional scene with the hero. That pulled me in, and I felt immense empathy for him. That is always a great start to a book. Written in the Cards is fast-paced, and pulled on my heart-strings a number of times.

The characters are endearing, from the heroine, a feisty, independent woman, to the adorable little girl, Jennie. Ms. Linwood brought all her characters to life, giving them surprising depth. Her emotionally-charged writing put me right in the middle of the scenes in the book.

As I mentioned already, the first scene helped me immediately bound to Ben, and as I delved into his character, I fell in love with his sense of honor and loyalty. He is a strong alpha male, not afraid to show his feelings for not only the heroine, but his sister-in-law and his sweet little niece, who also stole my heart.

Maggie Rutherford’s bold character pulled me in and had me rooting for her from her opening scene. I loved her determination to forge her own path, which went against the stereotype for women during the 1870s. While she is a very strong character, she still possessed all the nurturing characteristics I enjoy in my heroine.

If you are looking for a great western romance with enchanting characters and a strong plot, then you will enjoy Written in the Cards as much as I did. If you have never read any of Lauren Linwood’s books, this is a fantastic one to read first, next would be Music for my Soul, a medieval romance by her that I loved. Happy reading!
Posted by Vikki at 12:30 AM