Waiting For Love by Marie Force
(The McCarthys of Gansett Island series, book 8) 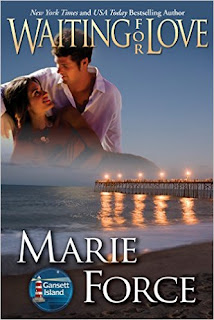 Sometimes the best offense is a good rebound...

Adam McCarthy has had a really bad week. In addition to nearly losing his three brothers in a tragic boating accident, his now ex-girlfriend has double-crossed him right out of the successful computer company he founded in New York City. What he needs is a few days at home on Gansett Island to make sure his beloved brothers are safe and to get back in touch with what really matters—his family, his friends and the tiny island that soothes his battered soul. On the ferry ride home, he runs into an old family friend who's had her own share of heartache, and Adam helps her through some rough moments, sparking an unlikely alliance.

Abby Callahan has come home to Gansett, single once again after her relationship with Dr. Cal Maitland blows up in her face. After two epic failures in the game of love, she's decided this is going to be the summer she busts loose and finally has some fun—and she's shaking things up in a big way! The new Abby swears, drinks, gets a tattoo, sleeps around and generally does anything her kinder, gentler alter ego wouldn't have dreamed of doing.

Before too long, Adam has appointed himself her guardian and is determined that the only sleeping around she's doing is with him. That is… unless his brother Grant is willing to risk his newfound happiness with Stephanie to keep Adam from rebounding with his ex. And what happens when Adam and Abby realize their summer fling has taken a serious turn, especially when he gets the chance to return to New York and fight for the company that's rightfully his? Abby has already followed two men off the island. Does she have it in her to find out if the third time really is the charm?

Another wild summer on Gansett Island is under way, complete with new stories for many of your favorite couples from past books! You'll also see more of Dan and Kara, David and Daisy, and find out whether Carolina has made peace with her relationship with the much younger and very sexy Irishman, Seamus O'Grady. Ready? Set? Let's go back to Gansett Island!

What a delightful series! I am so glad I decided to read the McCarthy’s of Gansett Island books. I am enjoying it tremendously and finding it quite addicting. Waiting For Love is my favorite, next to Maid For Love, which is the first book in the series. However, just because these are my favorites, they only nudge out the rest by a very small margin!

This is Adam McCarthy’s love story, the last of the siblings to fall in love. When I found out that Abby Callahan was the heroine, I was not sure I would enjoy this book very much. It’s not that I disliked Abby from the previous books, but I thought she had already found her happy ending with Cal Maitland, since she left the island to be with him.

I was so wrong! Adam and Abby are perfect for each other. Abby’s character has definitely received the short end of the stick in the romance department to say the least. First, she suffers her failed long-term relationship with Grant McCarthy and then she fails with Cal, and both for the same reason, lack of attention from the man she loves. This has her wondering if she will ever find someone who will put her first in his life, instead of second and even third.

Abby decides it is time for some changes. She has been a good girl all her life, and it has not gotten her what her heart desires. Abby is determined to drink too much, have meaningless sex and swear, all behaviors, kind-hearted and sweet Abby has never engaged in before.

Adam McCarthy has had the rug pulled out from under him. His long-time girlfriend has managed to push him out of the company he founded. Not only is his heart bruised, but so is his pride. When he overhears Abby talking to a captive audience on the noon ferry to Gansett Island, he is determined to rescue her from herself. If she is so determined to set out on this destructive path, he will just have to be her willing partner in crime. After all, some mindless indulgences may be what he needs as well.

After days of fun and mischief from skinny dipping in the moonlight to getting a tattoo with Abby, Adam begins to see she is the right woman for him in every way. However, Abby is set on spending the rest of her life on Gansett Island. He has a company to get back on the mainland. Could he give up his life in the city for the woman he has fallen in love with?

I do want to mention the narration by Holly Fielding. I thoroughly enjoy Ms. Fielding’s performance, and she does a great job giving this multitude of characters distinctive voices. She reads with emotion and brings the characters to life. However, there does seem to be some background noise in some of the recordings. Not enough to distract, but enough that I noticed it.

I thoroughly enjoyed Waiting for Love and can’t wait to read the next book in this heart-warming series. I love getting a chance to see the other characters growing in their relationships. Since Ms. Force writes “happily for now” stories, there are wonderful opportunities to extend the previous characters’ love stories. This is a series about a town along with a lot of great characters. I highly recommend these books. I am confident you will fall in love with Gansett Island and its wonderful residents, as much as I have. Happy reading!