Forever my Hero by Sharon Sala 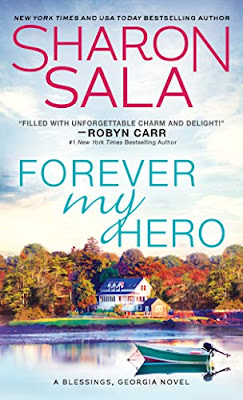 Every storm they've weathered...has led them to each other
Dan Amos lost his wife and son years ago, when they inadvertently got in the way of a death threat meant for him. He's never had eyes for anyone since, and he doesn't want to. But fellow Blessings resident Alice Conroy sparks something inside him...
Newly widowed, Alice was disillusioned by marriage and isn't looking to fall in love anytime soon. Then a tropical storm blazes a path straight for the Georgia coast, and as the town prepares for the worst, Dan opens his heart and his home. The tempest is raging, but Alice and Dan are learning to find shelter...in each other.
Buy Link:

This is the seventh book in the Blessings, Georgia series by Ms. Sala. when I received an invitation from the publisher, via Net-Galley, I eagerly accepted since I’d read the previous books and enjoyed them. My opinions are my own and are not influenced in any way.

I quickly became vested in the characters and the plot. The pacing is good and there was no sagging middle, which is a very good thing. One thing I did find disconcerting was a lot of head hopping. sometimes from one sentence to the next. that is the main reason I gave this book a little lower rating.

Alice is a wonderful heroine with all the characteristics I most admire. She has a fearless spirit, and while she has great reason to want to give up, she does not. She is an amazing mother, fiercely protective of her children, determined to give them the best. Although, she had a rough marriage with her late husband, she is willing to open her heart to love again.

Dan is a great hero. he is an honorable guy who doesn’t allow his tragic past to color his view of the world. I liked the way he looks out for others, including Alice. I truly admired him a great deal and wanted him to find his happy ending.

The romance between the hero and heroine is sweet, and even though it moved quickly, it still felt right. The chemistry is strong and very pleasing. The love scene is well written and enjoyable.

If you enjoy a story with engaging characters and an intriguing plot, then you will enjoy Forever my Hero. While I am not overly fond of Ms. Sala’s head hopping and giving so many characters a point of view, I will definitely read more books by her. Happy reading!


a Rafflecopter giveaway
Posted by Vikki at 12:30 AM No comments: 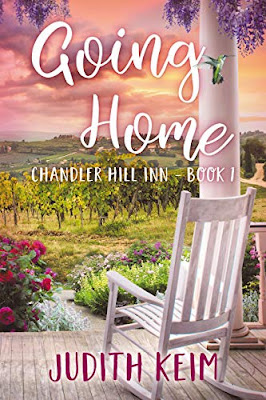 In 1970, Violet Hawkins’ only wish at eighteen is to escape her life in the Dayton, Ohio, foster-care system and make her way to the west coast to enjoy a mellow life and find the love she’s been missing all her life.

She makes it to San Francisco, but soon learns she needs a job if she’s to live properly. A kind, young man named Kenton Chandler offers her a sandwich and a job at his father’s inn and vineyards.

With nothing to lose, Lettie takes him up on his offer and begins a whole new life in the Willamette Valley, Oregon. She immediately falls in love with the land and is fascinated with the idea of growing grapes in order to make wines. She, Kenton, and Rafe Lopez become friends as she learns about running the small inn on the property.

At the same time, she marries Kenton, a stroke kills his father. And then before she can tell Kenton she’s pregnant, he dies in an automobile accident. Heartbroken and burdened with the gift of the Chandler Hill Inn and Winery, she’s left with the task of making them a success. Struggling to raise a child alone while working to grow the business, Lettie makes a shocking discovery that changes everything.

This is the first book I’ve read by Judith Keim, and it will not be the last. I’m so glad I accepted an invitation from the publisher, via Net-Galley, to read and review. My opinions are my own are not influenced in any way.

I thoroughly enjoyed Going Home. It’s unique because it follows a woman’s entire adult life. I enjoy women’s fiction, and this is an excellent one. The pacing is great, keeping me engaged from the beginning to the end.

Lettie’s character is complex. She is flawed and at times impulsive, but she is so interesting, I fell in love with her. It’s no wonder she’s in a hurry to find someone to love after growing up in foster care. I could understand how she fell so quickly for Rafe, only to be cast off because he bows to his family’s expectations. She does not let it color her future. When love comes along with her friend, Kenton, again she falls hard and fast.

There are actually two main male characters and a key secondary one in Going Home. Rafe who marries another to satisfy his family and Kenton, the young man who saves Lettie from a life on the streets in San Francisco. Then Kenton’s father, a man who takes Lettie under his wing.

Rafe’s character did not appeal to me in the beginning of the book but more than redeems himself by the end of the book. I shall not say more because I do not want to have any spoilers.

Kenton’s character is steadfast and offers Lettie the stability she craves and a family who will love her. My heart ached when he is tragically killed in a car accident. Theirs was a love cut short.

The key secondary character is Kenton’s father. He recognizes Lettie’s talent in knowing what wine is best. He grooms her for his winery, which is a godsend for her. When he dies, she inherits Chandler Hill Inn and Winery and makes it highly successful.

As I mentioned, Going Home follows Lettie’s life. I felt her joy in first love, the fulfillment she begins to feel with Kenton. The pain of losing him so soon, before she even had a chance to tell him they were expecting a child. Lettie is not a natural born mother but none the less, she raises her daughter to be an independent young woman with a huge heart. I enjoyed following her life from young girl to a mature older woman, one who makes some mistakes while learning from them, and lives a full life.

I’m glad I took a chance on Going Home. If you enjoy women’s fiction, then you will love Going Home as much as I. I will definitely look for more books by Ms. Keim. Happy reading!

The Governess by Christi Caldwell 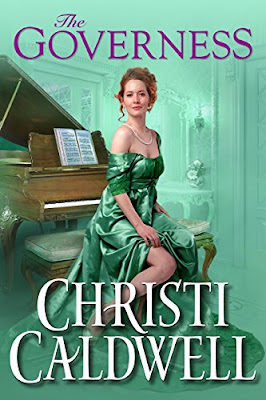 Regina (Reggie) Spark has loved Broderick Killoran, the resourceful and protective proprietor of the Devil’s Den, ever since he saved her from the streets and made her his right hand at the notorious gaming hell. For just as long, Reggie has never admitted her true feelings for him. Nor has she revealed her spirited ambitions—to buck convention and expectations and open a music hall.
While Broderick built his gaming empire with ruthless cunning, his loyalty to his employees is boundless. So when he learns of Reggie’s plan to leave his side and take charge of her own future, the betrayal cuts Broderick to the core. He responds as he would to any business rival…with swift retribution.
Instead of wilting, the savvy Reggie rebounds with a fury that shocks Broderick and stirs a desire he’s been holding in reserve for only ladies of nobility. But as their seductive battle of wills ignites under the harsh spotlight of the London Season, secrets are exposed as well—ones that could be ruinous in decent society but invaluable for the heart.

I have become a great fan of Christi Caldwell’s delightful Regency romances. When I received an invitation from the publisher, via Net-Galley, to read and review The Governess, I eagerly accepted. My opinions are my own and not influenced in any way.

The Governess is another wonderful Regency with just the right amount of detail, giving me the ability to use my imagination. The pacing is great, moving the story along perfectly. The characters are engaging, and the plot riveting. I thoroughly enjoy suspense and this one has it in abundance.

Reggie’s character is easy to love. She has been part of the Killoran family for ten years, but she can no longer remain at Broderick’s side when she knows he will never return her feelings. When he learns she plans to leave, he bribes her into staying to help his sister in her introduction to society. My heart ached for Reggie. Most of the family turns against making her time with them very uncomfortable.

Broderick is a great hero, having the characteristics I love most. He is a stronger provider for his family. While they are not family by blood, it does not matter. He is a very complex character and his backstory is very heartbreaking. I was so pleased that he found his happy ending!

The chemistry between Reggie and Broderick is amazing. Ms. Caldwell is great at building the sexual tension as the story progresses, which what I love about historical romance. By the time the love scene occurs, it is burning up the pages.

If you enjoy a romance with great characters, an interesting plot with a good bit of suspense and great emotionally-charged writing, then you will love The Governess. This may very well be the best book she has written thus far. Of course, I said that about her last one! I can’t wait for the next book is this amazing series. Happy reading!
Posted by Vikki at 12:30 AM No comments: