Book Review: My Kind of Forever by Tracy Brogan

My Kind of Forever by Tracy Brogan 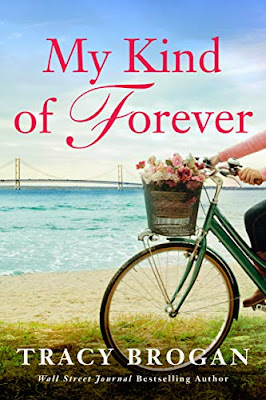 As the youngest mayor Trillium Bay has ever elected, Brooke Callaghan wants to prove she’s up to the challenge. She’s stepping out of her practical teacher flats and into her sister’s treacherously high heels…with disastrous results. But if she’s going to (literally) stumble her first day on the job, why not fall into the arms of a handsome stranger?
Leo Walker is a rarity on Wenniway Island. Not only handsome, he’s also single, funny, and—most importantly—interested in Brooke. Unfortunately, his reasons for being on the island are temporary, so in spite of the undeniable chemistry between them, he’s not a forever kind of guy.
When a private investigator arrives with news of a jewel thief hiding on the island, Brooke finds herself dealing with one kerfuffle after another, and Leo proves to be a delicious distraction. What does she really know about him, though? And the biggest question of all? Does this short-term romance hold the possibility of long-term love?

This is the second book in the Trillium Bay series, and I enjoyed it. Thanks goes the publisher, via Net Galley, for the opportunity to read and review. My opinions are my own and are not influenced in any way.

This book has a great deal to offer. The small—town aspect is well done. Ms. Brogan’s writing is clean and flows well. The characters are engaging, including the secondary characters. The plot is unique, and there are a lot of delightfully humorous moments.

The heroine’s character is enjoyable for the most part. She certainly has plenty of energy and wants to do a great job as the new mayor. However, her lack of self-esteem made it hard for me to imagine her running a success campaign to win an elected seat. To me, it seems out of character. Nonetheless, I found her appealing and wanted her to find her happy ending.

As a hero, Elliot is a mixed bag. He isn’t a straight up guy with her and hides secrets even after they become romantically involved. Those flaws make it hard for me to admire him. Although, he does redeem his character by the end of the book.

The romance between the hero and heroine is strong and I enjoyed how their relationship developed. The chemistry is fairly intense at times, the love scenes are based more in the emotions than their physical attraction, not that there’s any lack of that.

If you enjoy a romance with engaging characters and plenty of humor, then you will enjoy Ms. Brogan’s newest offering. Although this one was not as enjoyable as the first book in the series, I still enjoyed it and will read the next book when it comes out. Happy reading!

Dare Me Again by Shelly Alexander 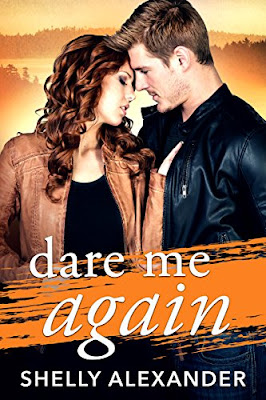 Hot-wired and restless, financial wizard Elliott Remington doesn’t turn down a dare. This time it’s to coordinate a service-dog boot camp for veterans at his family’s resort. Success means a one-way ticket to the West Coast to pursue his dream career. But it comes with a hitch: teaming up with his ex, who vanished on him ten years ago with nothing more than a kiss-off note.
As fiery as her hair and as stubborn as her name, Rebel Tate did what she had to do—for Elliott’s sake and her own. A dog whisperer with a keen sense of survival, she’s lived a tough life. Here she is, back in Angel Fire Falls, doing what she loves, next to a man she’s never forgotten. While the flame between them still smolders, neither is ready to get burned.
For Elliott, trusting Rebel is a gamble. For Rebel, sharing the secrets that sent her running is a risk. Now, while finishing a job that could define both their futures, two hearts are about to collide—and a second chance at true romance could be the greatest dare of all.

This is the second book in the Angel Falls series. I read the Dare Me Once and thoroughly enjoyed it, so I eagerly looked forward to reading Dare Me Again. Thanks goes the publisher, via Net Galley, for the opportunity to read and review. My opinions are my own and are not influenced in any way.

The premise for this book is very interesting, and I enjoyed the characters a great deal. Ms. Alexander did a great job giving enough detail regarding the dog training without becoming too technical. The pacing is good, and the dialogue is realistic and flows well.

Rebel Tate is an intriguing character, and I liked her a lot. She had a rough start in life, but her perseverance has carried her through. Her love for rescue animals is commendable and came through loud and clear. Although she left Angel Falls on bad terms, she is brave enough to return and try to make it right.

Elliott Remington is a drool-worthy hero, and while he’s driven, he’s open minded and is willing to reveal his secrets to Rebel as she opens up to her. Theirs is a give and take relationship, and I enjoyed it tremendously.

The romance between Rebel and Elliott is great with plenty of sparks flying in all directions from their first meeting. The chemistry is strong, and the love scenes are satisfying. I really wanted them to find their happy ending.

If you enjoy contemporary romance with engaging characters and an interesting plot, along with a bit of humor, then you will enjoy Dare Me Again. I look forward to the next book in this great series. Happy reading!
Posted by Vikki at 12:30 AM No comments: 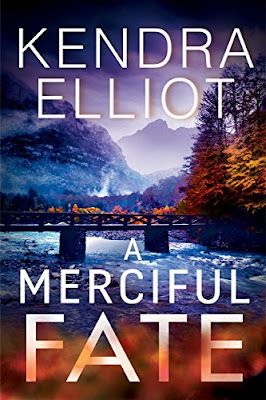 Raised by preppers, survivalist and FBI agent Mercy Kilpatrick has a deep-rooted need for a safe place. Her getaway in the Cascade Foothills is her secret. But when skeletal remains are unearthed—those of a murdered man linked to a notorious heist—Mercy realizes she isn’t the only one with something to hide.
Thirty years ago, an armored-car robbery turned deadly. The mastermind was captured. Four conspirators vanished with a fortune. One of them, it appears, never made it out of the woods alive. For Mercy and her fiancé, Police Chief Truman Daly, their investigation opens old wounds in Eagle’s Nest that cut deeper than they imagined. Especially when a reckless tabloid reporter draws fresh blood. It’s clear to Mercy that somebody in this close-knit community is not who they seem to be.
Some are still shattered by the heist. Some still have reason to be afraid. But which one will kill again and again to hide three decades of secrets? To land this case, it’s up to Mercy to unmask a familiar stranger before someone else dies.

I always know I’m in for a treat with a new release from Kendra Elliott. When I received an invitation from the publisher, via Net-Galley, I eagerly agreed to read and review the fifth book in her Mercy Kilpatrick series. My opinions are my own and are not influenced in any way.

As with all of Ms. Elliot’s books, the characters are real and flawed, the plot is intriguing and there’s plenty of emotions running high. One of the things I enjoy most about her books is the suspenseful scenes. She has a way of keeping me on the edge of my seat from the first page until the last.

I love Mercy’s character and in each of these books, it only grows stronger. While she’s complicated and has a lot of pent-up issues, she never lets them hold her back. She’s fierce in her determination to be the best FBI agent possible and protects her niece like a mama bear.

Truman is a drool-worthy hero any woman will love, and I’m one of them. He’s an honorable, caring man, and he’s so patient with Mercy. He never lets anything rattle him, whether it’s a case or Mercy.

While the romance is secondary in Merciful Fate, it’s still strong and adds a lot to the story. In Merciful Fate, Mercy and Truman’s relationship has progressed quite a lot, which pleased me immensely.

The suspense in this book builds as the tale of mystery and intrigue unfolds. Lots of good things to move the plot along. Ms. Elliott keeps her cards tight against her chest, so I was completely surprised by the characters involved in the heist.

If you enjoy a novel with plenty of high suspense with a great “who-done-it plot,” then you will love Merciful Fate. I do recommend reading the other books in this series before reading this one, so you’ll fully appreciate Mercy and Truman. Happy reading!

Book Blitz: Before We Were Perfect by S.D. Moore

Before We Were Perfect has been adapted into an award-winning screenplay titled Perfectly Normal in Flagstaff. The screenplay won Best Feature Script in the 2018 Top Indie Film Awards and a 2018 Silver Screen award in the Nevada International Film Festival.

Inspired by true events; Before We Were Perfect is a dramatic comedy about the Havreaux family and their ragin' Cajun uncle. Julz Havreaux is a beautiful young woman with imperfections who meets an imperfect handsome wounded warrior turned writer. Through comedic mishaps and drama, they discover that in spite of their imperfections they are perfect together. Contains adult themes, intense drama, sensuality, humor, and love. 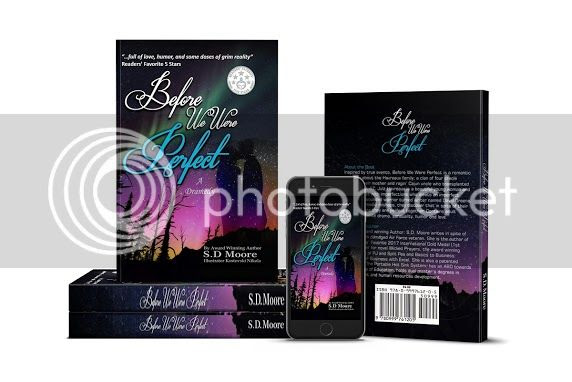 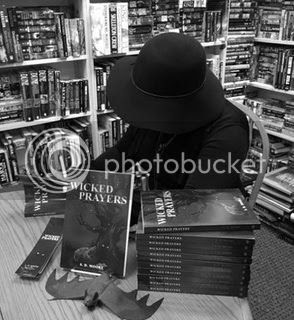 Multiple award-winning Author: S.D. Moore writes in spite of being a brain-damaged, heart damaged Air Force veteran who also battles Lupus. She is the author of the award-winning screenplay, Perfectly Normal in Flagstaff which won a 2018 Silver Screen award in the Nevada International Film Festival. S.D. is also the author of Readers' Favorite 2017 International Gold Medal (1st place) winning horror novel Wicked Prayers, the award-winning Adventures of PJ and Split Pea and the workbook Basics to Business: Minding Your Business with Excel. She is also a patented inventor of The Portable Hot Sink System; has an ABD towards a Doctorate of Education, holds dual master's degrees in management and human resources development.