Thank you for stopping by my blog today. The spotlight is on Ashes of Waterloo by Olivia Andem. Make sure you enter the Rafflecopter drawing for a chance to win a $5 Amazon GC. The link is below! 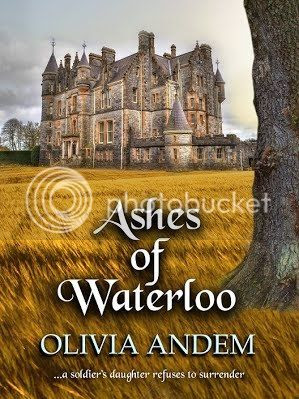 Rumors of Napoleon’s war plans spread across the French border into the Province of Brabant. The caretaker’s stepdaughter dreads the arrival of Napoleon’s soldiers with good reason...she knows their violent ways only too well. One fateful afternoon, Lisette is left in charge of the empty chateau. During the dark days that follow, a vow of revenge mars her efforts to make new friends and bask in the attentions of a rugged British officer. The three men she cares about face the battle ordeal of Waterloo. While fleeing the catastrophe of war, her every step is fraught with perils, brigands and heartache-

Lisette, a soldier’s daughter with iron will and a kind heart, refuses to surrender to hardship or vile threats... when faced with defeat by the past, she must find a way to protect those she holds dear and win a most precious victory.

The caretaker’s daily chore of inspecting the abandoned chateau fell to Lisette whenever her stepfather was absent.

Once this task was done, a few hours were hers to spend as she wished; the prospect hurried her from the family cottage with the door key and a workbasket in hand. Skirts held aside, she crossed the wide courtyard under clearing skies, avoiding the puddles strewn in her path.

Chateau Austerlitz, slate roof glistening like a dark mirror after the noonday rain, towered above the estate grounds.

A massive door of oak planks, studded with iron brads in the medieval fashion, guarded the converted fortress above a shallow flight of steps. The rusty lock, stubborn as always, finally yielded; as the door creaked open, dank air rushed past her cheeks. Out of an abundance of caution, she relocked the door from the inside.

Engulfed in a dusty gloom, the cavernous hall held a trove of tapestries, paintings and heraldic shields until the summer previous. Faint outlines on the limestone floors still marked where fine French carpets had resided.

Lisette hastened across the great hall to the stone staircase, pausing now and then to sneeze into her work apron.

Entering the second-floor ballroom, the sound of her footsteps provided ghostly company.

The open space was empty except for a carved trunk mistakenly left behind when the elderly Count Walbourg fled to Vienna; the aristocrat was banished from Brabant when Napoleon was exiled to Elba.

Fond recollections rushed from every corner.

On many a summer’s night, lively music from this grand room drifted across the courtyard to the caretaker’s cottage and into the open windows of Lisette’s attic bedroom.
During winter celebrations, logs blazed behind giant andirons in the two fireplaces. Here, the Austrian nobleman entertained his friends, the fine gilded panels brought from Paris resounding with their gaiety.

Now the salon’s ceiling was freckled with black mold, sad evidence of its changing fortunes.

Loud clattering arose in the courtyard...the sharp echo of horse hooves raced through the empty halls, a sound familiar to Lisette when she was a household servant here.

Was the visitor coming from Genappe? The narrow road past the chateau crossed the Baisy forest and led to Brussels but was seldom used until the drier summer months.

Thoughts in an excited jumble, Lisette rushed down the stairs and crossed the hall while untying her work apron, round wood heels of her shoes clacking on the stone floor.
No one had ever arrived at the estate when she was alone!

This morning after her family sped off to Genappe, she felt capable enough but now her confidence sagged.

Why had she not worn her best skirt instead of the shabby one? Stowing the apron in the basket, she checked her red knit stockings and white cap with trembling fingers.
Lisette carefully turned the large key and, opening the door a few inches, peered outside.
A military helmet, its metal badge gleaming...a soldier!

Sparks lit her memory afire...the French soldiers came to arrest her Irish father for desertion. Jabbing bayonets in every hay-filled corner of the small barn, they found him.
“No one is allowed here,” Lisette said, studying this soldier in the courtyard from behind the safety of the door.

His muddy black boots and splattered greatcoat suggested an arduous journey; tethered beside the steps, his dark bay horse was covered from muzzle to tail with brown road slurry.

Before she could warn the soldier not to come closer, he boldly mounted the steps.

“Bonjour, Miss Lisette.” His helmet perched in the crook of his arm. “I am Corporal Grosbek, serving His Imperial Majesty, Emperor Napoleon. Is Monsieur Pollard at home?”

“What do you want with him?”

How startling to hear their names spoken by a stranger!

“Is not Monsieur Pollard caretaker of this estate?” The soldier’s tone was firm but polite.

“He is on a list of possible suppliers for our regiment.”

Grosbek sprang across the threshold, forcing her aside as he said, “May I wait until he returns?”

Ignoring her protest, the corporal loped across the entrance hall to the drawing room like a haughty fox.

Why was he so certain of himself? Alarmed, Lisette edged to the open doorway, poised to run down the front steps.

“I am not a stranger,” he said, returning.

“Monsieur Pollard surely knows our family,” Grosbek replied, “as we have always lived in this parish. In fact, you visited Wavre a few summers ago. We spoke after Mass.”

“I’m very poor at remembering names,” she replied, unable to think of a better excuse while turning the matter over in her thoughts as if scrubbing potatoes.

After bitter arguments with her mother, Lisette was sent away to visit a distant cousin in Wavre for an entire summer.

That was three years ago...however, she recalled fleeing the church hall to escape from a brash young man, a pestering nuisance!

Could this be the same fellow?

“I remember you were rude to me, Miss Lisette, and hurried away as if I was a bore.”
The truth of his accusation stung. “You are mistaken.”

“Well, it was a few years ago.” He shrugged, adding a wry smile. “When does Count Walbourg return?”

“His Excellency resides in Vienna,” she replied, her pride in tatters, “and you may write to him there. However, you should know...since leaving here, he seldom replies.”

Lisette rubbed her fingers, recalling how raw they were after days of packing every candle, pot and kettle of Count Walbourg’s into straw-filled barrels and crates.

“Walbourg is an Austrian and Austria is our enemy,” he said in a gruff voice. “We can take property or anything else from enemies...or their friends.”

What kind of loyalty to a staunch ally was this? She wanted to explain how Count Walbourg received the former Spanish estate as a gift of France and later renamed it in honor of Napoleon’s victory at Austerlitz.

Arguing with the soldier, however, did not seem wise.

“Surely,” he said, eyeing the staircase, “some useful articles were left behind.”
“No, my family watches over an empty house.”

He tapped his boot toe in a rapid drumbeat. “Empty, yes,” he said finally, “and not what I had expected to find.”

While he spoke, she picked up the basket.

Forgoing the search for new dampness in the chateau for the time being, Lisette opened the front door wide and stood beside it, always a hint for a visitor to leave.

Grosbek agreeably followed her outside and looked up at the Latin motto chiseled above the doorway.

While she locked the door, he read the inscription aloud.

“FORTUNA AUDACES IUVAT...what does it mean?”

“I recall it translates as, fortune favors the bold.”

He hiked his chin. “When my unit from Paris arrives in this area, we will be very bold.”

“What town will they inhabit?” Lisette slipped the chateau’s key into her hidden skirt pocket, her mind racing with alarm. “Towns are the best place for billeting troops.”
That hardship must not darken their doorstep; she prayed he did not intend to bring his unit to the chateau.

“I’m not allowed to say.” He frowned. “We’ll forage to supply our regiment, possibly for weeks. I thought we might store supplies here...but it’s too damp.”

The burden of that terrible run-for-your-life feeling eased; her common sense, having flown away in fright, returned.

Relieved to be outside and thinking the soldier was a reasonable man, she sighed inwardly.

After they went down the steps to the courtyard, Corporal Grosbek glanced at his horse.
“I am traveling home from Charleroi.” Pushing aside his greatcoat, he grasped the hilt of the short saber at his waist. “May I water my horse and allow him to graze in your pasture for a while?”

Olivia M. Andem lives in Southern California and enjoys speaking to book clubs, library and civic groups about the historic Georgian era that inspired The Hawthorne Diaries saga. She is a member of Romance Writers of America and is an avid reader and researcher of her English and American heritage. Aided by the encouragement of family and support of a Yorkie terrier, Harley-Girl, current projects include works of both romance and historical fiction.