Gansett After Dark by Marie Force
(The McCarthys of Gansett Island series, book 11) 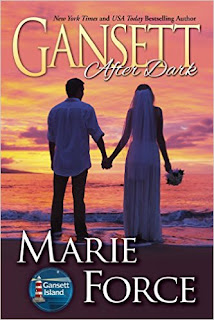 Owen Lawry is days away from leaving Gansett Island to attend the trial of his father, who is charged with assaulting his mother almost a year ago. He has spent his entire adult life trying to outrun his violent past, but the upcoming showdown with the father he hasn’t seen in more than a decade has him spending far more time in the past than in the present. His biggest challenge is convincing his pregnant fiancée, Laura McCarthy, to sit out the trip. The last thing he wants is to expose the woman he loves to the pain of his past.

Laura is determined to stand by Owen’s side throughout the trial and into the life they have planned together. The trial and her final divorce papers are the only things standing between them and the wedding they have looked forward to all year. Can she convince Owen to let her in and allow her to help him through this difficult time? And what will become of the man she loves if his father walks free?

As Owen and Laura prepare for the emotional battle with his father, his mother, Sarah, finally comes clean about her violent marriage with Charlie Grandchamp, the man who has been her friend and companion for months now. How will Charlie react to hearing Sarah’s secrets, and will their relationship move forward now that he finally knows the truth about why she can’t bear to let him touch her?

Catch up with all your favorite Gansett Island characters from the past ten and a half books and meet several new characters, including some McCarthy cousins on the island for Laura and Owen’s wedding, who will be featured in future books.

While Gansett After Dark could be read as a standalone story, readers will enjoy it more if they have read the rest of the Gansett Island Series, particularly book 6, Season for Love.

What a delightful series! I am so glad I decided to read the McCarthy’s of Gansett Island books. I am enjoying it tremendously and finding it quite addicting. Gansett After Dark is the continuation of Owen and Laura’s story, which started in Season For Love. I do recommend reading that book first to fully appreciate this one.

Owen and Laura have a big hurdle to get over before their wedding. His father’s trial is fast approaching and Owen is very unsettled by it. Laura is experiencing acute morning sickness that lasts all day and night to the point that she becomes dehydrated and has to spend time at the clinic where Dr. David and Victoria give her fluids so she’ll be able to travel.

Will Owen make it through the trial with Laura by his side so they can at last have their wedding, or will his torment get the best of him?

There’s a lot that happens in Gansett After Dark besides what’s going on with Owen and Laura. I thoroughly enjoyed Dan and Kara’s sub-plot and the way Tiffany tried to intervene at their engagement party was awesome. The cannon that is her ex-husband finally shot off!

There is a shocking turn of events for big Mac and Linda when Mallory Vaughn shows up on their doorstep. I won’t say more because I don’t want to give anything away, but hold onto your seats, Mallory is going to shake all the McCarthys, especially Janey and Mac.

I love following the other characters as they grow in their relationships. Adam and Abby get engaged and of course Abby wants them to get another tattoo. Sarah finally tells Charlie about the abuse she suffered for so many years at the hands of her husband and their friendship turns romantic. Seamus and Carolina throw a surprise wedding, and Brant finally gets Stephanie to set a date for Labor Day.

Again, I thoroughly enjoyed Holly Fielding’s performance. How she keeps all the characters from sounding the same is astonishing. She is the narrator for Kisses After Dark, but I have already downloaded Love After Dark and noticed there is a new narrator. She has some big shoes to follow in estimation!

If you’re looking for a series that will have you laughing one moment and crying another, then you will love the McCarthys of Gansett Island. While you could read these books out of order, I don’t recommend it. Start with Maid For Love, you will not regret it. Happy reading!