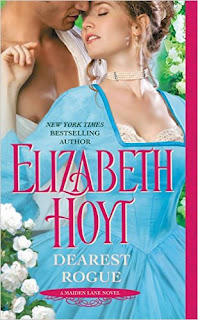 HE CAN GUARD HER

Lady Phoebe Batten is pretty, vivacious, and yearning for a social life befitting the sister of a powerful duke. But because she is almost completely blind, her overprotective brother insists that she have an armed bodyguard by her side at all times-the very irritating Captain Trevillion.

Captain James Trevillion is proud, brooding, and cursed with a leg injury from his service in the King's dragoons. Yet he can still shoot and ride like the devil, so watching over the distracting Lady Phoebe should be no problem at all-until she's targeted by kidnappers.

Caught in a deadly web of deceit, James must risk life and limb to save his charge from the lowest of cads-one who would force Lady Phoebe into a loveless marriage. But while they're confined to close quarters for her safekeeping, Phoebe begins to see the tender man beneath the soldier's hard exterior . . . and the possibility of a life-and love-she never imagined possible.

While browsing books offered for review on Net-Galley, I found Dearest Rogue and since I had read books by Elizabeth Hoyt in the past, I requested it. This book is another fantastic addition to the wonderful Maiden Lane series. This is definitely a character-driven read, and I enjoyed it immensely.

Captain James Trevillion sustained an injury which has left him with a bad limp, causing him to resign from the 4th dragoons. He has been hired by the Duke of Wakefield to guard his sister, Lady Phoebe because she has slowly been losing her sight for years and is now almost completely blind. Phoebe is bright, vivacious and witty with everyone, except the captain, but when he saves her from kidnapping, she changes toward him, and now looks upon him as her friend and no longer the overbearing man who keeps her from freedom.

Trevillion is fiercely attracted to the enchanting Phoebe, but knows he is too beneath her to ever have her return his regard. Yet Phoebe is far from the typical duke’s daughter. When danger strikes again, they are forced to flee London.

Can Trevillion overcome the barrier society dictates and win the heart of the sweet and innocent, yet alluring Lady Phoebe, while keeping her from harm, or will those barriers separate them for good?

What makes Dearest Rogue such a delightful read are the characters. Phoebe is easy to love. While she regrets the loss of her sight, she does not let it throw her into despair. She is determined to live a full life and gain some independence, whether her brother agrees or not. I loved her feisty attitude and her kindness to her loved ones, even her autocratic, controlling brother.

James Trevillion is a fantastic hero with all the qualities that I love. He’s honorable and kind and determined to keep Phoebe safe, even when she puts herself in danger in her bid for freedom. He earns Phoebe’s trust and admiration when they are forced to go into hiding by showing her true kindness and offering her friendship. He’s a bit of a tortured soul, and Ms. Hoyt does a fantastic job of protecting his secret without irritating me, which is a big plus.

Dearest Rogue has a bit of everything to make it an engaging read, a great romance, delightful characters and mystery. It kept me reading long into the night. I highly recommend this wonderful love story between two people who should not have fit. I’m sure you will enjoy it as much as I have. Happy reading!
Posted by Vikki at 12:30 AM