Thank you for visiting my blog today. To celebrate the release of Snow in July, Kim Iverson Headlee is holding a Rafflecopter drawing for a $25 Amazon/B&N GC during her tour so make sure you follow the link below to enter. 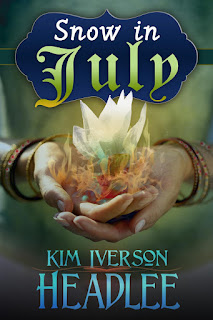 Sir Robert Alain de Bellencombre has been granted what every man wants: a rich English estate in exchange for his valiant service at the Battle of Hastings. To claim this reward, the Norman knight must wed the estate's Saxon heiress. Most men would leap at such an opportunity, but for Alain, who broke his vow to his dying mother by failing to protect his youngest brother in battle, it means facing more easily broken vows. But when rumors of rampant thievery, dangerous beasts, and sorcery plaguing a neighboring estate reach his ears, nothing will make him shirk duty to king and country when people's lives stand at risk. He assumes the guise of a squire to scout the land, its problems, and its lady.

Lady Kendra of Edgarburh has been granted what no woman wants: a forced marriage to an enemy who may be kith or kin to the man who murdered her beloved brother. Compounding her anguish is her failure to awaken the miraculous healing gift bequeathed by their late mother in time to save his life. Although with his dying breath, he made her promise to seek happiness above all, Kendra vows that she shall find neither comfort nor love in the arms of a Norman…unless it snows in July.

Alain is smitten by Lady Kendra from the first moment of their meeting; Kendra feels the forbidden allure of the handsome and courtly Norman "squire." But a growing evil overshadows everyone, invoking dark forces and ensnaring Kendra in a plot to overthrow the king Alain is oath-bound to serve. Kendra and Alain face a battle unlike any other as their honor, their love, their lives, and even their very souls lie in the balance.

While the title, Snow in July, did not entice me, the book description did, so I decided to give this a read. I love a novel set in the medieval period, especially ones involving the Battle of Hastings. I became immediately engaged since the book’s opening scene is in the midst of that battle. I love it when a book drops me in the middle of action right away.

Sir Robert Alain de Bellencombre is a troubled man. While he wants to serve his king, he does not feel he is worthy of the honor bestowed upon him. He broke his vow to his mother to protect his younger brother, who fell during the Battle of Hastings. He has decided to return to his home rather than accept the riches and the fair lady. However, when he is called upon to settle unrest in the area where the estate is located, loyalty wins out. He goes there disguised as a squire to avoid the betrothal.

Lady Kendra of Edgarburh made a vow at her brother’s deathbed to never marry anyone who carries the blood of his murderer, but also promises Del she will seek happiness. Distraught over her inability to use the healing powers she should have inherited from her mother, she is riddled with guilt. She mourns for her brother and visits his resting place each day, placing a rose on his image.

When Kendra is abducted, Alain rushes to save her, but when he reveals who he is, will his deceit doom his love for the Lady Kendra forever?

I thoroughly enjoyed the romance between Kendra and Alain, and I rooted for their happy ending throughout the book. For the majority of the story, the pacing is excellent, keeping my attention until the last part of the tale.

I loved Lady Kendra’s character from her first scene. Her love and concern for her brother brought me to tears. She is exactly the perfect heroine for a medieval romance. She remains true to her vows and her honor, while still maintaining a gentle demeanor.

Alain’s character is a hero after my heart. He’s a warrior with all the chivalrous honor I expect in a medieval novel set in this intriguing period.  He’s also fierce in his loyalty to his king, determined to succeed on his mission. While he initially does not want to marry the Lady Kendra, he will obey William the Conqueror, knowing the king’s plan is a good one and will unite England.

Snow in July was a solid 5 Gold Crowns until the last part of the book. I struggled with the paranormal thread, finding it a bit too far-fetched. I think this story could have been accomplished without that angle. I also feel the book should have ended well before it did. While I love having all the loose ends tied up, this one took too much time accomplishing it, causing the last couple of chapters to drag.

Nonetheless, Snow in July is a well-written story with plenty of action and a tender romance. Ms. Headlee definitely gave me a wonderful glimpse at this amazing time in history. Her descriptions of the attire, the dwellings and daily life activities gave an authentic setting for this beautiful love story. I highly recommend this book to anyone who enjoys a good medieval romance, you will not be disappointed. Happy reading!

A young woman was standing on the staircase’s top landing as Alain approached. No, he amended, feeling his eyes widen and his blood heat, a goddess. The suggestive clinging of her grayish-blue gown made him forget his blasphemous lapse.

He shifted from foot to foot to mask his reaction. Her ashblonde curls, creamy complexion, and alluring curves conquered his fear of failure. As his heart thrummed its praises of her beauty, he vowed to protect this lady unto the ends of the earth.

But he tempered his lauds with a petition for wisdom, for he needed to ascertain her heart. Experience had taught him the folly of loving a beautiful but title-hungry woman like Marie.

Yet sorrow enveloped this lady like a shroud. The slope of her delicately boned shoulders, the tilt of her petite chin, the hooded reserve of her slate-blue eyes, the slight pout of her full lips all sang the same dirge.

Blessed Virgin, could I be the cause of her misery? Please, let it not be so!

He wanted nothing more than to gather her into his arms and kiss those lips until their song transformed from sorrow to joy.

Their gazes met. Her look, a cross between appreciation and reprimand, made him remember his “station,” and he looked down. 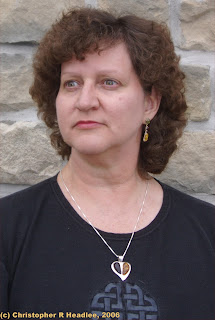 Kim is a Seattle native (when she used to live in the Metro DC area, she loved telling people she was from "the other Washington") and a direct descendent of twentieth-century Russian nobility. Her grandmother was a childhood friend of the doomed Grand Duchess Anastasia, and the romantic yet tragic story of how Lydia escaped Communist Russia with the aid of her American husband will most certainly one day fuel one of Kim's novels. Another novel in the queue will involve her husband's ancestor, the seventh-century proto-Viking king of the Swedish colony in Russia.

For the time being, however, Kim has plenty of work to do in creating her projected 8-book Arthurian series, The Dragon's Dove Chronicles, and other novels under her new imprint, Pendragon Cove Press.