King of Clubs by Sandra Owens 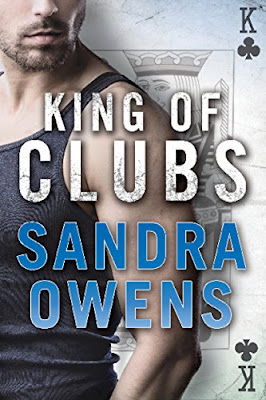 In the second novel in acclaimed author Sandra Owens’s Aces & Eights series, passions—and tempers—flare as one star-crossed couple gets a second chance at love.
Covert FBI agent Court Gentry loves his brothers, his job, and his Harley-Davidson. Once he loved a girl, too, but when she broke his heart, he put his emotions on lockdown…until she crosses his path again.
On vacation six years ago, free-spirited Lauren Montgomery fell hard for Court Gentry. She returned home happier than ever, only to descend into a spiral of abuse by her ex-husband, Stephan. When Stephan threatened to kill any man who touched her, Lauren cut Court from her life—but not from her heart.
When Lauren and Court reunite after her friend marries his brother, Court guards himself against the person who made him feel such intense passion and pain. Except the undeniable spark between them is impossible to contain and heating up fast. Six years ago, it was love. Now, it’s just lust. Keeping it merely physical is a foolproof plan…right?
When Stephan is released from prison, Lauren can’t outrun her past anymore, and Court vows to protect her. But with Lauren in imminent danger, Court must question his heart and risk his life to save the woman he never stopped loving.

I originally found Sandra Owens’ historical romances several years ago and fell in love with them. When she started writing romantic suspense, I hesitated before reading her first novel for Montlake in her K2 series, but since that time, I have fallen in love with her contemporary books as well.

When I received an invitation to read and review King of Clubs, I eagerly accepted, and I have enjoyed this fantastic romantic suspense novel even more than I enjoyed the first book in her new Aces & Eights series. That’s saying a lot because I loved Jack of Hearts!

King of Clubs is another fast-paced romantic suspense with cutting-edge action scenes that kept me gripping the arms of my chair. Ms. Owens has become an expert in this sub-genre of romance.

Lauren Montgomery’s character pulled at my heart-strings. Her tale of abuse at the hands of the controlling bastard of an ex-husband is something no one should ever have to deal with. This part of the story mirrors the abuse other women have experienced at the hands of an abusive male, be it husband, boyfriend, or father.

Court Gentry is a great hero. Of course, Ms. Owen’s yummy description of his attributes had me fanning my face. His loyalty to his brothers is amazing. For Court to keep such a heart-wrenching secret to protect them, and at such a young age, tore at my heart. I’ll admit to shedding a few tears.

If you want a story that will hold your attention from the first page to the last, and one that will touch not only your heart but your soul, then you will love King of Clubs. I highly recommend this amazing book; you do not want to miss this one. Happy reading!
Posted by Vikki at 12:30 AM