A Lady’s Revenge by Tracey Devlyn 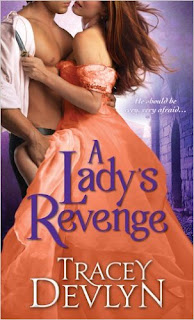 A British agent flees her French captor's torturous dungeon and falls in love with the decoder responsible for her imprisonment.

Nothing Gets Between a Lady and Her Vengence...

In a daring rescue, beautiful and wily secret operative Cora deBeau is reunited with her childhood friend Guy Trevelyan, who wants so much more from her now than friendship ...

He'll Stoke the Fire Until They Both Go Up In Flames...

But Cora's mission against the French has become personal, and even the fire between her and Guy won't deter her. When it comes to getting sweet, cruel revenge, nothing will stand in a lady's way ...

I started this book in the fall of 2013 after receiving it at the Romance Writers of America conference a couple of month before. However, since I read everything on my Kindle, I found it difficult to read a printed book and set it aside on my nightstand even though I was enjoying it. Recently, I decided I really needed to finish it, so I pulled it up on my Kindle to purchase the e-copy. Fortunately for me it’s in the Kindle Unlimited program, so I downloaded it immediately for free.  This is a fantastic book from start to finish!

Cora de Beau is an operative for the British government. When her target finds out, he imprisons her and inflicts horrendous acts of torture, trying to get her to give up her cohorts. Although she will bear the scars from her ordeal for the rest of her life, Guy Trevelyan rescues her and vows to find her torturer before the villain can get his hands on Cora to finish what he started.

On a madcap adventure that takes them from London to the country and back again, Cora and Guy rekindle their childhood friendship and take it far beyond what either of them had ever imagined. Can their race to find her captor before he can find her, lead to a love that will overcome Cora’s insecurities and the shame she feels regarding her past deeds?

While I love regency love stories, I don’t normally enjoy books with spies in them and especially women spies. I was pleasantly surprised with this one. In fact, Tracey Devlyn has changed my mind entirely. While Cora does engage in masculine activities, she is still very much a feminine woman with vulnerabilities that touched my soul. I fell in love with her character in the first scene and found her endearing. Her love of cats melted my heart.

Guy Trevelyan is a fantastic hero. As a decoder for the British government, he isn’t your typical alpha-male character. He’s more intellect than fierce warrior, even though he does do his fair share of protecting his lady love. His desire to protect Cora from the villain is commendable.

Another thing I really liked about A Lady’s Revenge was the delightful secondary characters. From Cora’s maid, a charming older woman who looks after her with the determination of a mother hen, and then there is her coachman, not to mention Scrapper, her cat, who saves her from a kidnapping.

A Lady’s Revenge is an emotionally-charged tale of love and intrigue. The action scenes are thrilling, heart thumping thrilling, and kept me on the edge of my seat. Cora is such a broken character with huge self-esteem issues and no wonder when you find out how she has had to live her life and the lengths she was willing to go to, to find her revenge against the man who killed her parents.

I’m so glad I finished this amazing book. Tracey Devlyn’s writing style flows smoothly, and her plot is enthralling. If you love a story that grabs you and doesn’t let go until the end, then you will enjoy A Lady’s Revenge as much as I have. Happy reading!
Posted by Vikki at 12:30 AM