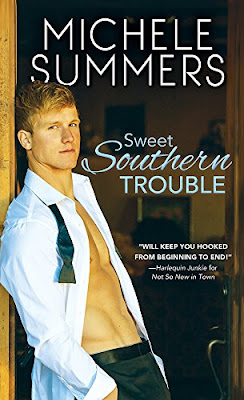 An ambitious Southern belle
Marabelle Fairchild knows she's a gal who can get things done. Feeling unappreciated at the exclusive private school where she's a kindergarten aide and varsity tennis coach, Marabelle determines to score with the next big fundraiser. What she doesn't expect? A smokin' hot football coach to throw her off her game...
A reclusive NFL bachelor...
NFL coach Nick Frasier is Raleigh's most eligible bachelor, but he wants to focus on his career...not his playboy status. He doesn't need a smart-mouthed, pint-sized kindergarten teacher pestering him. So he cuts Marabelle a deal—in exchange for Nick sponsoring a bachelor auction starring him and his gorgeous celebrity pals, Marabelle will pose as his fiancée to ward off unwanted advances.
What could possibly go wrong?
Buy Link:

This is the first novel I have read by Michele Summers, and I must say I was pleasantly surprised. When I received an invitation from the publisher via Net-Galley to read and review, I hesitated, because I was not sure I would like the heroine. I’m so glad the sexy hero enticed me to accept.

Marabelle Fairchild wants to be accepted by her peers and agrees to manage the upcoming fundraiser for her school. She knows she can gain their approval because she gets things done. What she does not expect is a startling attraction the coach of the NFL football team.

Nick Frasier needs to clean up his playboy image quickly. When he meets the pint-sized Marabelle, she is the perfect answer to his dilemma. Who better than a kindergarten teacher to have as a pretend fiancée?

Can he convince her to go along with his plan to redeem his reputation, and while they are playacting, will she heat up the sheets with him as well?

I thoroughly enjoyed Sweet Southern Trouble from the first page to the last. All the characters are great from the hero and heroine to the teammates on Nick’s team, even the villain of the story adds a lot of humor to this entertaining read.

Much to my surprise, I fell in love with Marabelle immediately. She’s just so darn cute! Her insecurities due to her narcissistic mother called to me in a big way. No wonder she has issues with a mother like that. It did not help that her father goes along with whatever his ex-wife wants!

Nick is a great hero. He’s a fun-loving character who truly wants to change his image, and not just so he keeps his job. He really cares for his team, and he cannot resist his little dynamo. The banter between him and the other characters had me laughing out loud on more than one occasion.

If you are looking for a light-hearted romance with surprising depth of character, then you will enjoy Sweet Southern Trouble as much as I did. While this is the first book I have read by this author, it will not be the last. Happy reading!
Posted by Vikki at 12:30 AM