The Mysterious Merrianna by Carolynn Carey 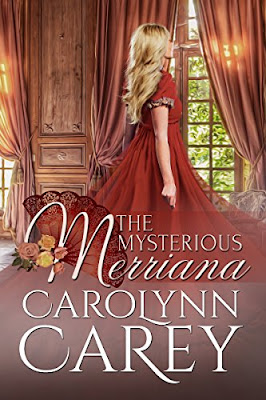 A Regency Romance
On his way to France to extract an English agent, Justin Foster, Earl of Cardleigh, stops overnight at his favorite country inn, only to discover a mysterious female in the kitchen. This gorgeous woman claims to be the daughter of an English farmer, but she cooks like a French chef and sings French songs like a native of that land. When Justin learns that the agent who was supposed to travel with him has been mysteriously disabled, he insists the female accompany him to France and serve as his guide.

Having recently arrived in England on a smuggler’s boat, Merriana de Mérchan has no desire to return to France, but the distrustful Earl of Cardleigh, who assumes she is a French agent, gives her no choice. Although aware that she presents a suspicious image, she dare not attempt to tell him the full truth for fear of an unknown enemy who seemingly wants her dead.

As Justin and Merriana struggle toward opposing goals, the attraction they feel keeps drawing them closer. The question becomes, can they trust each other long enough for love to triumph?

I have been a fan of Carolynn Carey’s Regency romances for quite some time. The Mysterious Merrianna is an enchanting read. While the plot is slightly convoluted, I was still able to keep up with the myriad twists and turns. Not only is the heroine a delight, so are several other characters as well, especially Antonia. In fact, I have just downloaded her love story and can’t wait to read it!

Merrianna de Mérchan is working as a cook, having arrived from France destitute. While cleaning up after the meal she prepared for a visiting earl, she starts singing a little ditty in the language of her birth, when the earl appears in the kitchen and accuses her of being a French agent.

Justin Foster, Earl of Cardleigh needs to retrieve a fellow spy from enemy territory, but the man who is supposed to help him is injured. He uses his considerable powers of intimidation to convince Merrianna to act as his guide.

As they make a mad dash across the French countryside, his desire for Merrianna grows and has him questioning whether to believe her story or cling to his original belief that she is a spy.

This fascinating story moves on at a fast pace, keeping my interest from the beginning to the end. The book is well-written, which made it very easy to read. Ms. Carey adds in the details needed to give the reader a glimpse of the glitter of the Regency period, from the description of Merrianna’s attire to the majesty of a London ballroom.

I fell in love with Merrianna’s character right away. While she is strong-willed, she is not too bold. Her determination to take care of herself is commendable. I particularly enjoyed her friendship with Antonia and the camaraderie she has with Tom and Luke. She has a lot to overcome before she finds her happy ending.

Justin is not my favorite character, especially in the beginning, but Ms. Carey was able to redeem him by the end of the story. I’ll admit that at times, I feared that would not be the case. Several times, I wanted to shake some sense into him.

I thoroughly enjoyed the spy element of this story, which kept me turning the pages on my eReader at a furious pace to see what else would befall sweet Merrianna. I’m not normally a huge fan of spy romances, but this one is so well done, it may have changed my mind!

If you enjoy traditional Regency romance with endearing characters and an intriguing storyline with several emotionally-charged moments, then you will enjoy The Mysterious Merrianna. If you like heat with your romance, then this might not be the book for you. To be honest, I enjoyed this one so much, I did not even miss the steamy scenes in many historicals today. This reminds me of the delightful tales by Barbara Cartland, which I used to enjoy many years ago. Happy reading!
Posted by Vikki at 12:30 AM