The King’s Man by Alison Stuart

Welcome, and thank you for visiting today. Alison Stuart has an exciting new release and let's help her have a fantastic tour. Ms. Stuart will be giving away a Kindle 6" Glare-free touchscreen display, with WiFi, via a Rafflecopter drawing at the end of her tour. Don't forget to enter for this chance to win! 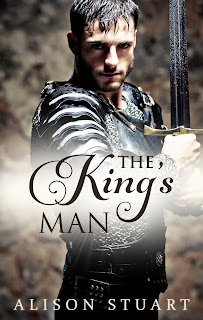 The second in a tantalizing trilogy from award-winning author Alison Stuart, about warriors, the wounds they carry and the women that help them heal.
London 1654: Kit Lovell is one of the King’s men, a disillusioned Royalist who passes his time cheating at cards, living off his wealthy and attractive mistress and plotting the death of Oliver Cromwell.
Penniless and friendless, Thamsine Granville has lost everything.  Terrified, in pain and alone, she hurls a piece of brick at the coach of Oliver Cromwell and earns herself an immediate death sentence. Only the quick thinking of a stranger saves her.
Far from the bored, benevolent rescuer that he seems, Kit plunges Thamsine into his world of espionage and betrayal – a world that has no room for falling in love.
Torn between Thamsine and loyalty to his master and King, Kit’s carefully constructed web of lies begins to unravel. He must make one last desperate gamble – the cost of which might be his life.

I have read the first book in this series, By the Sword, and I did enjoy it. Since I am fascinated by this period of English history, I immediately accepted this book for an honest review, via Net-Galley. I thoroughly enjoyed the chance to explore this troubling time.

The start of this book threw me right into the middle of an exciting scene and introduced the hero and heroine immediately. That is always a good thing. After that scene, though, The King’s Man is a bit slow until the middle of the book, but then it picks up dramatically and has an action-filled climax.

Thamsine Granville is an interesting character. Her willingness to seek a positive outcome, even when her circumstances are very dim, impressed me. I became vested in her character from the very beginning. Most women in her situation would have given up and meekly gone along with the plans set in place by her father. That would have been the norm for the times this story is set in, but Thamsine does not. She refuses to give any man a chance to abuse her. While her character is extremely strong, she is still vulnerable and feminine, along with nurturing toward her new friends and her sister. I admire that quality in a heroine a great deal.

On the other hand, Captain Kit Lovell is not a character easy to admire, especially in the first half of the book. It soon becomes apparent, he is not honorable and is willing to betray his friends and Thamsine. While later in the novel, his back story lent a compelling reason for his behavior, I would have preferred knowing why he was willing to betray his friends and country sooner. His affair with Lucy Talbot also kept any romance from developing until the second half of the book, and again casts his character in a bad light. Fortunately, he is redeemed and becomes a hero I can admire by the end of the book.

I’m glad I did not give up on this story because the second half of the book more than makes up for the issues in the first half. Once Kit gets rid of Lucy, the romance between him and Thamsine is emotionally-charged and very believable. I truly wanted this couple to have their happy ending by the latter part of the book.

One of the things I like most about Ms. Stuart’s books is her ability to bring this turbulent time in English history to life. She expertly interweaves her fictional characters with authentic historical ones of the time.  If you find the English Civil War fascinating, then you will enjoy The King’s Man. I know I did. I do recommend this author, even though her pacing is slow in the first half of the book after the first scene. Happy reading!

Excerpt:
Every time the door to the taproom opened, Thamsine looked around. It had been a week since she had last seen Kit Lovell, and as the other men slipped into the private parlour, she knew tonight he would come. She felt her heart skip a beat with anticipation.

Nan passed her with two full jacks of ale.

‘You’re like a she-cat on heat,’ she remarked. ‘He’ll be here soon enough. In the meantime, go and make yourself useful. There’s tables to be wiped and those ’prentices over yon could do with some female company.’

Thamsine cast a glance at the table of rowdy ’prentices and shuddered. If they required female company, they could look elsewhere. Instead she tightened her apron strings, pulled the grimy rag from the pocket and began the task of wiping down the long oak table.

‘Well, well, I hardly recognized you.’

At the sound of Kit’s voice, she looked up, unable to stop the smile that crept to her lips.

He stood back and looked at her with a critical eye. ‘The black eye is now a fetching shade of yellow. As for the clothes, the bodice is perhaps a little immodest and the petticoats a little short, perhaps, but you pass.’

Thamsine looked down at the clean, serviceable, but faded cloth of the petticoats and tugged at the gaping bodice.

‘The twins found them for me. The previous owner was a little shorter and rather fuller of figure,’ she said ruefully.

‘Well, Lovell.’ Jem Marsh sauntered over and placed a hand on Thamsine’s shoulder. ‘Quite a little find you dropped on my doorstep. Broken just about every dish in my kitchen and dropped more jacks of ale than I can count, but she has one redeeming feature.’

Kit raised an eyebrow. ‘And that is?’

‘Voice of an angel.’ Jem waved a hand around the crowded taproom. ‘See this crowd? All thanks to her.’

Award winning Australian author, Alison Stuart learned her passion from history from her father. She has been writing stories since her teenage years, but it was not until 2007 that her first full-length novel was published. Alison has now published 6 full-length historical romances and a collection of her short stories.  Her disposition for writing about soldier heroes may come from her varied career as a lawyer in the military and fire services. These days when she is not writing she is travelling and routinely drags her long-suffering husband around battlefields and castles.


a Rafflecopter giveaway
Posted by Vikki at 12:30 AM