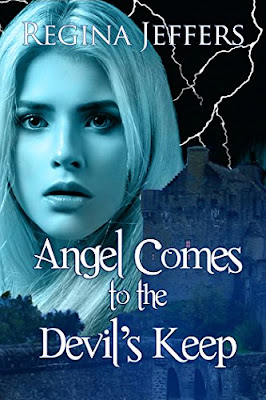 Huntington McLaughlin, the Marquess of Malvern, wakes in a farmhouse, after a head injury, being tended by an ethereal “angel,” who claims to be his wife. However, reality is often deceptive, and Angelica Lovelace is far from innocent in Hunt’s difficulties. Yet, there is something about the woman that calls to him as no other ever has. When she attends his mother’s annual summer house party, their lives are intertwined in a series of mistaken identities, assaults, kidnappings, overlapping relations, and murders, which will either bring them together forever or tear them irretrievably apart. As Hunt attempts to right his world from problems caused by the head injury that has robbed him of parts of his memory, his best friend, the Earl of Remmington, makes it clear that he intends to claim Angelica as his wife. Hunt must decide whether to permit her to align herself with the earldom or claim the only woman who stirs his heart—and if he does the latter, can he still serve the dukedom with a hoydenish American heiress at his side?

This is the first book I have read by Regina Jeffers, but it will not be the last. I received a copy from the author in exchange for an honest review, and I thoroughly enjoyed Angel Comes to Devil’s Keep.

The pacing is excellent, and the book is well-written, plus for an ARC, the editing is superb. I fell in love with the hero and the heroine, and the secondary characters are surprisingly well developed. The sweet romance between Hunt and Angel is very fulfilling. This is an excellent example of a traditional Regency.

Angel’s character is endearing from the start. She is so concerned for a complete stranger and willing to put herself in a possibly scandalous position if society ever learned she’d spent time alone with Hunt. She wants to please her father and honor her late mother’s wishes, even though, she would rather wait for a love match. Her integrity and willingness to help others stole my heart.

Hunt is a bit more complicated of a character. Since he has lost his memory, he doesn’t have his past to guide him. It causes him a great deal of anxiety, because he will be a duke someday. If he doesn’t remember his past, how can he possibly step into his father’s shoes. The one thing he does know, he is in love with Angel and will do what it takes to win her heart.

If you enjoy a romance with plenty of murder and mayhem and one with delightful characters and a villain that you will never guess, then you will love Angel Comes to Devil’s Keep. This is a sweet romance, yet Ms. Jeffers is able to expertly build sexual tension. Happy reading!