The Hunter Bride by Cynthia Woolf 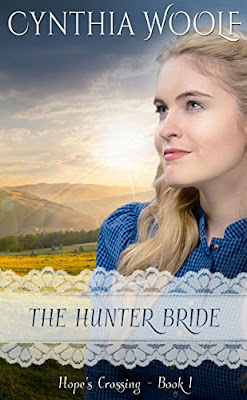 Five years ago, a band of outlaws murdered Josephine Shafter's parents and younger brother. Desperate for vengeance, Jo has spent every day since serving the law as a bounty hunter. But the trouble with justice served is that now that her family's killer has been brought in, she has nothing to do and no one to hunt. She decides it may be time for a new life and a fresh start. She longs for the arms of a strong man around her, and for a child of her own. But the Chicago dandies don't know how to kiss a woman who is tougher than they are. Jo decides her best chance at happiness is to head out West, to the wild Montana territory, to start a new life as a mail order bride.

Sam Longworth has been the Sheriff of Hope's Crossing, Montana for two miserable years. He was much happier roaming the untamed plains as a bounty hunter, bringing outlaws to justice. But that was no life for a husband or father, and his wife wanted him home, safe and sound, every night. Forced into marriage, theirs had never been a love match, but he thought warming her bed every night would be enough. Instead she left him and took a stagecoach to rendezvous with her childhood sweetheart. She vowed never to return, and died on the journey.

Plagued by guilt over her death, Sam doesn't need a woman's love, he just needs a wife. He orders a mail-order bride, a woman who won't make too many demands, who can build a home and give him children. Josephine fits his life perfectly, until danger follows her to her new home and he realizes she's keeping secrets that could get them both killed. Trust is a hard road for two lost souls used to keeping secrets, and their new and fragile love might not be strong enough to survive what's coming.

This is not the first book I have read by Cynthia Woolf and it will not be the last. This book is free on Amazon and the audio is available for a modest price, so I eagerly downloaded both. I always enjoy and good Mail-Order Bride romance and this one definitely has a twist.

I thoroughly enjoyed this well-thought out plot. There are no plot holes and the ending was not rushed. The pacing is nice and steady, and Ms. Woolf’s writing style is smooth and flowing. Overall this is an interesting read.

Josephine Shafter is not my favorite kind of heroine, and I did not expect to like her, but as the story unfolds I gradually warmed up to her. Her motives for her unusual career are honorable, and I could see myself taking that path under the circumstances. By the end of the book, I very much wanted her to hear the words “I love you” from the stubborn hero.

Sam Longworth is a mixed bag for me. He has a soft side, which he is determined to hide. His late wife left him and was killed, so he is determined to never give his heart again, and definitely never say those dreaded three little words. He fights against it to the bitter end.

At first, his only reason for taking a mail-order bride is because he wants a woman to cook and clean for him and be a willing bedmate, but that does not really hold true since he finds out almost immediately, Jo is a bounty hunter and lacks many of the womanly virtues he thinks he wants. It’s quite obvious that he is vastly intrigued by her, and deep inside knows she is perfect for him.

The villain in this story is ornery, a really bad guy and dangerous, but a little inapt. He bungles several attempts on Jo’s life through much of his own stupidity, so at times his attempts are a bit comical, not sure if that was Ms. Woolf’s intent or not, but I’ll give her the benefit of doubt and believe they are supposed to be more humor than suspenseful.

The romance between Jo and Sam is not fierce, even though they clearly like each other from the start. It’s nice to read a book where there is not instant love but like instead. I do feel that Jo is a bit wishy-washy at times regarding her need to hear the words. That became irritating after a while. She vacillates between wanting to stay, yet believing she has to go too often. Sometimes paragraph to paragraph.

The narration is performed by Lia Frederick. I think she narrates most if not all of Ms. Woolf’s books. She reads with just the right amount of emotion, which I truly appreciate. Lately, I’ve listened to several books where the narrator sounds very wooden. Her performance enhances the story and pulls me in. I always know I’m in for a treat when she is the narrator.

Nonetheless, I did enjoy The Hunter Bride, and I do recommend it if you enjoy a story with a unique plot and true to life characters, especially for this time period. Both Jo and Sam have flaws and for me that makes them real. I look forward to reading future books in this series. Happy reading!