Book Review with featured author: A Duke Too Far by Jane Ashford

A Duke Too Far by Jane Ashford 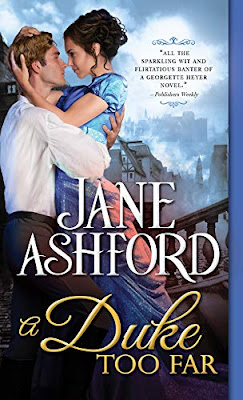 Peter Rathbone, Duke of Compton, is mourning the loss of his sister Delia, but the work of keeping his family's deteriorating estate afloat is never done. When Miss Ada Grandison, a close friend of his sister, arrives with a mysterious letter that she claims holds the secret to saving the family home, Peter is skeptical to say the least...his life is about to get even more complicated.
Ada is eager to do whatever she can to help the Rathbones. She brings clues that Delia claimed would change everything for the family and that lead Ada and Peter on a hunt to unravel the past. But they'll have to face their painful memories—and their true feelings for each other—to discover the truth.

Thanks goes to the publisher and Net-Galley for the complimentary copy of A Duke Too Far by Jane Ashford for the purpose of reading and reviewing prior to publication. A Regency romance book 4 in The Way to a Lord’s Heart. My opinions are my own and no one has influenced me in any way.

A Duke Too Far is well-written, but there are several problems. The pacing is extremely slow, which made it difficult to remain engaged and become vested in the characters. The best part of the book is the mystery involving the hidden treasure. I enjoyed that aspect of the novel. I also enjoyed the characters’ struggle with grief.

Ada Grandison is the heroine. She was close friends with the hero’s late sister. She arrives unannounced at the duke’s home accompanied by her chaperone and three school friends. They want to help the duke discover the treasure, but he has no faith in the rumors that his late father and sister insisted existed.

Peter Rathbone, the Duke of Compton is our hero. He’s inherited the title, along with a broken-down estate and no funds to improve his prospects or properties. The last thing he needs is a gaggle of women showing up on his doorstep. I did like his character but would have enjoyed more depth.

If you enjoy mysteries and not that into romance, then A duke Too Far by Jane Ashford my work for you. I did like the premise for this book, but the execution fell short for me. Happy reading! 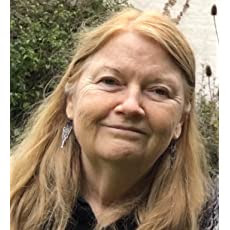 Jane Ashford discovered Georgette Heyer in junior high school and was entranced by the glittering world and witty language of Regency England. That delight was part of what led her to study English literature and travel widely in Britain and Europe. Born in Ohio, she has lived in New York, Boston, LA, and London.
Jane has written historical and contemporary romances. Her books have been published in Sweden, Italy, England, Denmark, France, Croatia, Russia, Latvia, Slovenia, the Czech Republic, Slovakia, and Spain, as well as the U.S. She has been nominated for a Career Achievement Award by RT Book Reviews.